The Lazuli Reading Series aims to explore the intertextual connections between works published in our journal, AZURE: A Journal of Literary Thought, and classical and theoretical pieces of fiction, non-fiction, and poetry. The guided discussions may feature author readings, dramatic performances, and live insights by expert scholars.

NEXT UP: The Comic-Grotesque in Poetic Performance - Dan Butterworth's "drunken man on a bicycle" in conversation with poetry by Yeats, Eliot, Auden, & others. (Sunday May 16, 5-7pm ET)
"Think of yourself rather as something much humbler and less spectacular, but to my mind far more interesting—a poet in whom live all the poets of the past, from whom all poets in time to come will spring. You have a touch of Chaucer in you, and something of Shakespeare; Dryden, Pope, Tennyson—to mention only the respectable among your ancestors—stir in your blood and sometimes move your pen a little to the right or to the left. In short you are an immensely ancient, complex, and continuous character, for which reason please treat yourself with respect and think twice before you dress up as Guy Fawkes and spring out upon timid old ladies at street corners, threatening death and demanding twopence-halfpenny." - Virginia Woolf, "A Letter to a Young Poet"
EVENTS

The Comic-Grotesque in Poetic Performance:
Dan Butterworth's drunken man on a bicycle in conversation with poetry by Yeats, Eliot, Auden, & others. 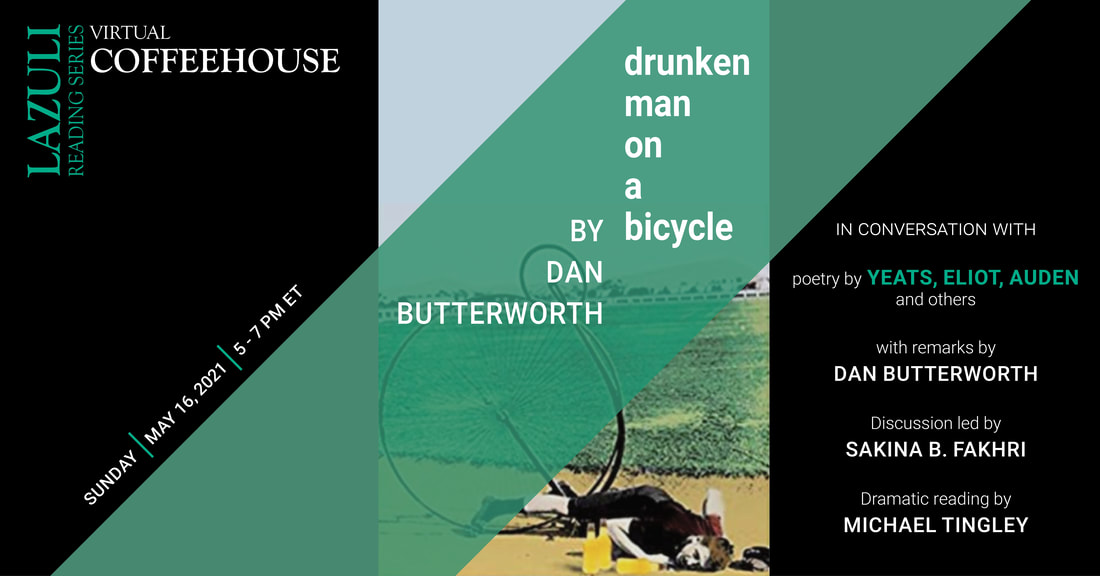 ​The Ogre does what ogres can,
Deeds quite impossible for Man,
But one prize is beyond his reach,
The Ogre cannot master Speech:
About a subjugated plain,
Among its desperate and slain,
The Ogre stalks with hands on hips,
While drivel gushes from his lips.”

Many of these poems are political in nature and interact, in some manner, with the themes in “drunken man on a bicycle.” We will be exploring the conceit of a “play within a play,” examining how an aesthetic distance affects our perception of the grotesque, or how metaphoric and scientific language can place us at a sometimes-analytic, sometimes-comical, but ever-illuminating distance from political realities in our midst. The shifting perspectives (I, you, me, we), the constant expanding and contracting of scale from the particular to the universal (rendered both in form and content), and the themes of childhood, sickness, religion, and rhetoric will also figure in our discussion. Finally, we will dig through Butterworth’s references that span periods of historical time and fictive mythology (from Tiresius and Medusa to Napoleon and Stalin) and compare the effect of these allusions to those found in the poetry of Auden, Eliot, and Yeats.

Some of these poems are lengthy (not to mention our feature poem), so do be sure to allot enough time to read them before our discussion. Although we will not have time to delve into every single poem in detail on the day itself (unfortunately!), your having read them beforehand will prepare your literary palate for a textured reading of “drunken man on a bicycle.” I will pull particularly relevant lines from some of the material so that we can focus our time on close reading rather than generalized impressions of all of this lovely, infinitely discussable poetry.

All poetry and supplementary readings are free, and these documents and links will be e-mailed to you once you sign up; that being said, the majority of the works we will be reading are by Auden, so if you’re an Auden-enthusiast you might want to obtain a paper copy of one of his anthologies!

“Still Sort of Weeping the Substance”: Sugar Cane and Blood in the Artistic Imagination​

To be announced soon...